Shutterdown is a Pittsburgh-based indie-electronic band driven by its two founding members, Max and Antisa, who came together to form the group in early 2009.  It wasn’t until early 2010 that the duo settled on its distinctive sound – pulling from their varied influences and interests: synthpop, electronic dance music, metal, New Wave, goth/industrial, experimental and trip hop.  Antisa’s dynamic vocal styling compliments the diversity of the compositions created by the group, which range from slow, atmospheric and thoughtful to uptempo weighty dance music.

The band released its self-titled EP in the Fall of 2010 and have since been writing and recording its first full-length album, Dreamwalker, that is set for a Spring 2013 completion.  Shutterdown’s primary stomping grounds have been limited to the areas in and around Pittsburgh as the group focuses on completing Dreamwalker. Tour dates are TBA following its official release. 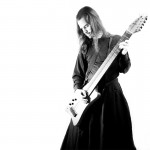